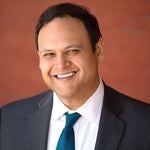 Neil F. Nazareth, a principal of Martzell, Bickford & Centola, is a litigation attorney and has made a career of helping victims of major industrial disasters and environmental exposures receive compensation for injuries and death. Neil's practice is focused on asbestos and maritime cases. In single plaintiff cases alone, Neil has recovered over 50 million dollars for his clients.

Along with his firm, Neil represented the first death case from the Deepwater Horizon explosion and represented several governmental and private landowners for their economic loss and environmental damages as a result of the oil spill and other contaminants. In addition, Neil has represented many victims and their families for injuries and death from mesothelioma and other diseases caused by asbestos exposure.

Neil has been honored by his peers for his exemplary work and was awarded the Louisiana Super Lawyers honors every year since 2013. Neil was also awarded the prestigious Louisiana Super Lawyers Rising Star recognition in 2013 given to less than 2.5% of lawyers in Louisiana. He was  recognized in St. Charles Avenue Magazine and Louisiana Life Magazine for this distinction. Neil has been asked to give several presentations to lawyers and communities on topics including the Oil Pollution Act and Class Action Litigation, and most recently he taught a CLE (continuing legal education) course to lawyers on Maintenance and Cure and Punitive Damages.

Neil graduated from Louisiana State University with a Bachelor of Science degree in Finance where he was on the Dean's List.  After his undergraduate studies, Neil graduated from the Institute of Politics and from law school at Loyola University of New Orleans' School of Law where he was on the Moot Court Board and was a Law Excellence Award recipient in several courses.

In addition to his active law practice, Neil is the Chair of the Admiralty section of the American Association of Justice.  He is the past President of the Academy of New Orleans Trial Lawyers.  He is a scoring judge in the STAC trial advocacy competition.  He is a graduate of the Leadership Academy of the American Association of Justice; and he is a mentor at the Loyola University College of Business Executive Mentor Program.  He also works as a lobbyist at the United States Senate and House of Representatives in Washington D.C. on behalf of the victims of asbestos poisoning, nursing home abuse and employment harassment and discrimination.