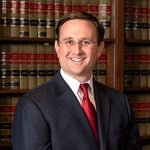 Upon joining Martzell, Bickford & Centola in 2019, Jeremy J. Landry has practiced in various areas of both trial and appellate levels, including a focus on class action/mass torts, personal injury suits, and wage and hour suits.  Jeremy has previously served as in-house counsel for a national healthcare company and later gained litigation experience in private practice in the area of labor and employment.

Jeremy completed his J.D. in 2006 at the Loyola University New Orleans College of Law.  He graduated with a B.A. in History from Louisiana State University in 2003.