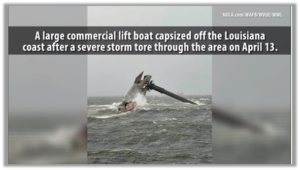 A 129-foot commercial lift boat carrying 19 people capsized off the Louisiana coast on Tuesday after a severe storm passed through the area, authorities said.

The U.S. Coast Guard and multiple good Samaritan vessels responded after the SEACOR Marine boat capsized south of Grand Isle around 4:30 p.m., according to USCG officials. Six people who were on the boat at the time have been rescued and one person has been found dead, Capt. Will Watson, commander of the Coast Guard's New Orleans sector, said on Wednesday.

Update 2:10 p.m. ET April 14: Capt. Will Watson, commander of the Coast Guard's New Orleans sector, confirmed Wednesday that crews searching for survivors after a SEACOR Marine lift boat capsized off the coast of Louisiana on Tuesday have recovered the body of one person who died in the incident. Six people have so far been rescued.

“The search effort continues on the remaining 12,” Watson said Wednesday at a news conference. “My heart and the collective heart of our team goes out to the families and to SEACOR, but we're giving it all we have.”

Watson said unexpectedly bad weather likely posed a challenge for the SEACOR crew, which was headed for a pass about 25 miles east of Port Fourchon. The boat had left the port around 1:30 p.m. Tuesday.

While responding to the incident, officials said they dealt with 80 to 90 mph winds, 7- to 9-foot seas and “extremely limited visibility.” It was not immediately clear why the boat was in the water amid the inclement weather.

“We're trying to figure this out as we go,” Watson said. “We're talking to survivors, we're talking to the company, and so we're focused on the search and rescue effort more than anything right now, but those details will come out ... as we learn more about what went on.”

Lafourche Parish President Archie Chaisson confirmed that 18 people were on board before the lift boat, named the Seacor Power, took on water sometime before 7 p.m. CDT, the website reported.

“We expected some winds and possible rains, but nothing as extensive as what took place on the coastal areas of Jefferson Parish,” Templet told the website.

Original report: Coast Guard spokesperson Petty Officer Jonathan Lally said his agency received reports of “multiple vessels hit” by the stormy weather, according to WAFB. Wind gusts of up to 75 mph were measured during the storm, the television station reported.

Bruce Simon, of Cutoff, Louisiana, posted several photos of the high waves on his Facebook page.

Simon wrote that he had never heard so many “mayday” calls at one time.

“I'm on the boat and we doing 4 knots keeping the bow in the wind,” Simon wrote. “Waves are breaking over the bow.”

It is unclear how many people have been rescued.

The U.S. Coast Guard in Houston confirmed that authorities from Texas are on their way to assist in the search and rescue, WWL reported. That includes a search plane from Corpus Christi, the television station reported.