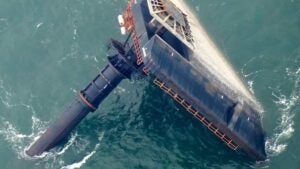 The capsized lift boat Seacor Power is seen seven miles off the coast of Louisiana in the Gulf of Mexico Sunday, April 18, 2021. The vessel capsized during a storm on Tuesday. (AP Photo/Gerald Herbert)

PORT FOURCHON, La. — A sixth body has been recovered from the wreckage of the SEACOR Power in the Gulf of Mexico as divers continue to search for the dwindling number of missing crewmembers who were on the liftboat when it capsized last week.

The Lafourche Parish coroner told our partners at the Times-Picayune | New Orleans Advocate Tuesday that 31-year-old Quinon Pitre of Franklin was identified after his body was pulled from the capsized vessel. His cause of death wasn't immediately available.

He is the sixth confirmed fatality from the maritime accident. Six crewmen were found alive in the initial hours after the fatal sinking on April 13, but families of the other 13 who were on the boat had been hoping for a miracle, that their loved ones had made it into an air pocket under the water.

Seven remain missing. The rest have been recovered unresponsive and pronounced dead once pulled from the water.

While rare, some people have been known to survive in air pockets inside shipwrecks for up to two weeks. But as the search nears its eighth day, and more bodies are found, that is becoming a slimmer possibility for those on the Power.

The Coast Guard stopped its search and rescue operations Monday, with only private divers contracted by the Power's parent company still searching. Those 17 divers plan to be in the water until the entire ship is searched, despite treacherous conditions under the water that have complicated and at times stalled diving operations completely over the past week.

The focus now turns to the National Transportation Safety Board, which will investigate why the Power went down amid an unexpectedly harsh storm that swept through the northern Gulf. That investigation is expected to take anywhere from 12 to 24 months to complete.