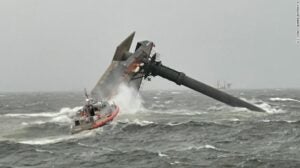 (CNN)Six people were rescued and 12 others are missing after a commercial vessel capsized several miles south of Port Fourchon, Louisiana, officials said Tuesday.

An urgent marine information broadcast was issued, and multiple "good Samaritan boatcrews" responded, helping with the rescues, according to the release.