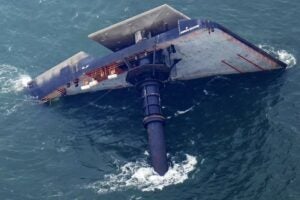 The family of a Houma crewman presumed dead after an oilfield boat capsized in a storm April 13 has joined others suing the Seacor Power's owner and other companies over the incident.

In both cases, the families allege Seacor Marine, Seacor Liftboats or Talos Energy directed the boat to leave Port Fourchon and head into the Gulf of Mexico despite severe weather warnings. Talos owns the oil platform off Plaquemines Parish where the boat was headed when it capsized in a storm that at times packed hurricane-force winds.

However, a company official previously said the final decision on whether the 234-foot Seacor Power would sail rested solely with the boat's captain.

“The go, no-go decision is entirely the captain's," Seacor Marine CEO John Gellert said during an April 19 news conference. "The captain can rely on us, everyone ashore, or weather reports for advice, but ultimately it's his decision.”

The suit was filed by Charlton Jr. and June Rozands, the crewman's paternal grandparents and co-administrators of his estate. They are represented by attorney Hunt Downer of the Waitz and Downer law firm in Houma.

Also named as a defendant is SEMCO, a company based in Lafitte that built the Seacor Power.

The suit claims the companies were negligent in their duty to provide a safe environment for both work and transport. The family also alleges the companies failed to provide adequate lifesaving equipment that ultimately contributed to Christopher Rozands' death.

In the separate case filed Wednesday by Yvette Ledet over her husband's death, Talos told WWL-TV, The Courier and Daily Comet's news partner, that the company would not comment on litigation. Seacor did not reply to the TV station's request for comment.

At least four families of crewmen killed or presumed dead have now filed lawsuits against the companies involved.

Six crewmen, including David Ledet, were found dead, six were rescued and authorities have said seven, including Rozands, are missing and presumed dead.

Volunteers, including the United Cajun Navy, continue to search for the missing crewmen. Meanwhile, Seacor and the Coast Guard are working to bring the vessel ashore.