Did a DUI Charge Ruin an NFL Player’s Career? 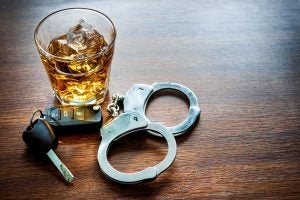 It was around 6:34 on the morning of June 11, 2017 when Kenner police found a wrecked Jeep Wrangler sitting in the eastbound lanes of Joe Yenni Boulevard. In the driver's seat they found a 24-year-old NFL receiver for the New Orleans Saints. What happened next would not only put the young man's career in jeopardy, it also serves as a warning to other young people who find themselves on the wrong side of the law.

Could a DUI Ruin a Young NFL Player's Career?

The night before, this young NFL player had gone out drinking in New Orleans. After allegedly drinking three glasses of whiskey, he stopped drinking at midnight and went home. On the way back to his home, the player reportedly crashed into another car and came to rest facing westbound in the eastbound lanes of the road. When police arrived, the man blew a .125 on a breathalyzer test—the legal limit in Louisiana is .08.

The police arrested the young athlete, who was later released after posting a $2,150 bond according to The Times-Picayune. This was his first drunk driving offense, which allowed the young man to join the district attorney's “diversion” program. This program allowed for the charges against the athlete to be pre-empted, but if he fails to complete the program, the charges could be reinstated. This could allow him to avoid the stiff penalties set out for drunk driving offenders by Louisiana law, but that didn't help him when facing the regulations of the NFL.

As punishment for driving while intoxicated and violating the NFL's substance abuse policies, this receiver was suspended for the first three games of the NFL season. At first this would seem like a small punishment, but to become one of the top receivers on the New Orleans Saints, this player needed that valuable game time. He was unable to build a receiving rapport with Saints QB Drew Brees, which affected his entire season. This led to the Saints being unwilling to improve the terms of his contract, forcing this receiver to accept an offer from the Ravens.

Though this DUI charge didn't derail his career, things could have been much worse for this athlete. Other NFL players who have been charged with DUI have suffered penalties as extreme as being banned from the NFL. Severity of the incident and jail time often factor in, but without knowing his legal options, this young NFL player could have been given the jail time that would have derailed his career. Luckily, he took advantage of legal options that are sometimes given to first-time offenders who meet certain requirements. Knowing these options is the job of an experienced criminal defense attorney, which makes them invaluable when dealing with a DUI in Louisiana. Considering how such a charge can endanger a young person's future, taking advantage of those options can keep your life headed down the right path.